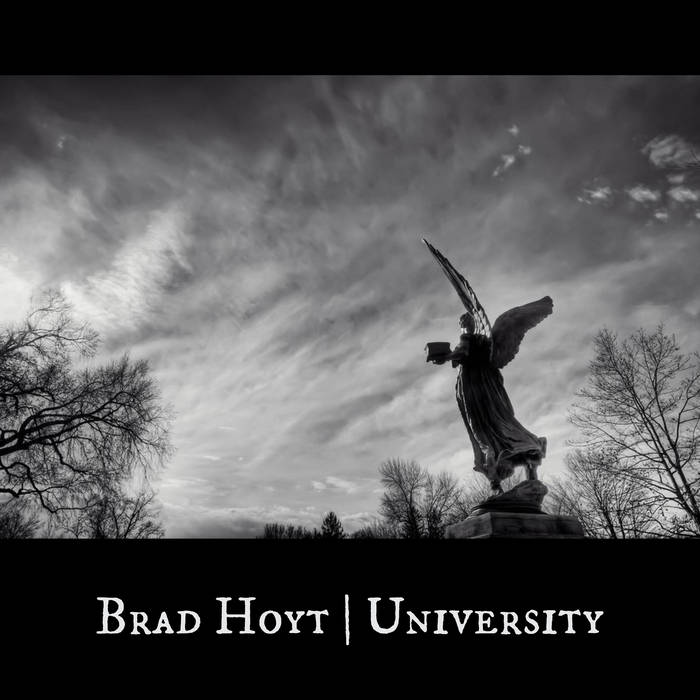 This is the first of three releases that cover my early days of writing and recording music. This collection, entitled “University” contains music selected from the following CDs I made at the time:

These recordings were originally recorded on reel-to-reel tape and most were converted to digital format from cassette masters.

Road Not Taken – The first portion of this track is one of my earliest compositions (named ‘Tragedy’) recorded in 1990 and the last part is a piano recording of the second tune I ever wrote, entitled “For No Apparent Reason” which was written in 1988 and recorded as an addendum to the first recording in 2012; the string part was also recorded then as well.

March – A basic piano piece be Schubert that I learned during my first piano class at BSU.

Somber – The very first live, multi-track recording I ever did, and it was to a ¼ inch reel to reel recorder. I played piano along with Steve Board on classical guitar and Dan Johns on the steel string guitar.

Tracks 6 – 14: Starting in the fall of 1990, I attempted my first multitrack recording on an Otari 16-track analog tape machine. During my freshman year, I properly discovered the Beatles, becoming familiar with their entire discography. One thing that fascinated me from the beginning was reading stories about how they would utilize multi-track tape recorders to get their sound. At that time, I was almost in disbelief when the opportunity presented itself to actually try to do a multitrack recording in an actual studio! (Tascam 4-track recorders was what I was aspiring to at the time). I’m forever grateful to Rob Poach and Stan Sollars for volunteering to help me learn. I wouldn’t be where I am today without their help.

The Evil Beyond Me – A song about a person going insane, this recording has a history! This tune was credited to Dan Johns and myself on the liner notes of the CD this track was included on (Melodic Memoirs), but the reality is, I only contributed a piano line and an alternate melody/lyric (sung by Debbie Perkins). Dan Johns wrote the chords, main melody and lyrics (basically the whole tune). Dan and I had a blast recording this tune. We recorded guitar and piano in one pass, then the cello, then the classical guitar + ukulele after that before adding the vocals. With tracks to spare, we added a saxophone and a multitude of obnoxious ramblings, including some proper backwards masking. Many years later in 2008, I transferred the original master recording to digital and in the spirit of George Lucas, I added some additional overdubs which included a subtle electric guitar an additional string track to support the cello. For this final release, I added some additional subtle strings by Spitfire Audio that was sampled in London.

In the Morning – This one of the initial recordings with vocalist Jeff Wiggins. One thing that you’ll hear again and again with this early music is some seemingly odd chord choices. At the time I was fascinated with the idea of coming up with new chord progressions and this is one example of that.

Memorabilia – A tune written by a young person about an older person thinking back on their life when they were young. Early one week, I believe it was in the spring of 1991, I got word that I’d be able to get into the studio in a couple days. I said I could make it, but didn’t have a new tune to record, so I wrote this in a practice room in the music building in a couple of hours, met with Dan Johns the next day to go over the tune, and then the day after that, we went in and recorded it. Dan recorded a couple guitar tracks and sang the melody, then Jeff Wiggins came in to sing the higher parts. I ended up mixing the two singers together, with Jeff being the younger voice and Dan being the older voice, which makes sense given the lyric.

Side Effects – About a person who wakes up in an insane asylum, this is a tune written by Dan Johns. We recorded this track in an afternoon and added some voiceovers and effects.

Cold Summer Rain | I Must Go – Recorded in 1992. This first part of this recording ‘Cold Summer Rain’ was the first piece of original music that I ever wrote in 1988. In retrospect, the fascination with plucking the piano strings as demonstrated in this recording eventually lead to the creation of the harp guitar that I play today. “I Must Go” was inspired by the stories of troops who went to fight in the first Gulf War in Iraq. Ric Dwenger, who sang and played guitar on this tune, was a member of the band “The Great Divide” which included my banjoist uncle John Hoyt and Jeff Hanks, who added harmony vocals, was later the first man at my wedding.

Being Without – A piano solo recorded in 1992, ‘Being Without’ comes from the lyric written for the music which is now lost to time. In retrospect, it sounds very 80s.

Folk Blues – Recorded in 1992. A bluesy piece that was partially inspired by playing along to some Eric Clapton tunes.

Winning These Days – Recorded in 1991. I was proud of this composition when I wrote it, but I could not crack the lyric. I ended up recording the music with Ric Dwenger on guitar and an accordion player I met a week earlier in the music building. The lyric was never finished, and this instrumental version of the tune sat in the archives for years. I really liked this tune when listening to the track again, so I decided to add the melody with an ocarina, oboe and flute for this release.

Tracks 15-18: These tracks were recorded at the M.E.T. (Music Engineering Technology) studio at Ball State University in 1994.

There’s The World – In 1994, the bulk of my recording moved to the Music Engineering Technology studio at Ball State where my friend George Karst was studying. He engineered the tracks I recorded there and this was our first recording session. Another member of my uncle’s group, Rob Beach played guitar on this track. Since his son Gabe was with him and a gong happened to be in the studio, I had him hit that the beginning of the tune. There was a lot of cool gear in the control room which explains the over-the-top effects on this recording. For this release, I decided to add some more strings and a children's choir to fill out the arrangement.

The Arrival – I played in the jazz bands at Ball State for the entire time I was there. The last year I was there, I became friends with Kevin Flanagan, who was one of the lead players in the first jazz band. At this time, I was totally into Sting’s new “Nothing Like the Sun” CD, and the soprano sax work of Branford Marsalis, so I wanted to record something with that instrument. An interesting side note regarding this tune: The two main chords that are improvised over (Cmaj7b5 / Ebmaj7b5) was the starting point when writing the tune “Kiss of Fate” that appears on my 2013 CD “Far Away From Everyday” and 1994-1998 compilation “New York”.

Pow! – In the spring of 1994, I caught wind of a battle for the bands contest that was going to take place in a couple weeks, so I tracked down some of the best musicians I could round up, practiced a couple times, came up with the name “The Gurus”, entered the contest and won it! Actually, from one I recall, I only knew Chris Walden, and maybe Kevin Hood, and they found the others. It was a blast playing with those guys, and a learning experience for me. I was so used to playing in a jazz or solo piano setting, I didn’t really get what it meant to play in a blues/rock setting. When I listen to the other recordings we did, my piano was way too busy, and sloppy! Haha This track totally held up though. It’s a cover of the Beastie Boys’ tune “Pow!”. Listening back on it now, I really like Matt Boyer’s guitar work.

Friendship – A simple jazz standard-like tune I recorded with Kevin Flannagan. When listening to the track again for this release, I noticed that the piano levels were pretty low, so added a Rhodes piano part to fill it out a little.

The Thread of Life – Piano solo recorded in 1993. A diminished, half diminished, major 7/9 extravaganza.

Living the Silent Dream – Recorded in 1992. In retrospect, an odd tune indeed. The last name of the singer has been lost to the sands of time…

She’s Got a Way